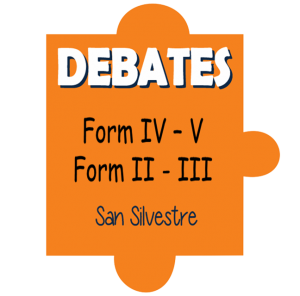 BSP Form IV-V debate (27th April)
This was the first of the two BSP debates held in San Silvestre. It was the first BSP debate to use the World Schools Style of debate, which differs by involving clashing points through “points of information” (speaker questions). Teams of 6 students from each BSP school attended having the opportunity to debate and be an audience member. The host school provided extra students who acted as judges, timekeepers and chairs in three simultaneous debates. The debates were impromptu and were on the following motions:

THBT the private lives of famous people should be off-limits.
THBT Peruvian schools should be required by law to have an LGBT support group.

Despite only having an hour to prepare, students produced some compelling speeches to back up their house’s position. During the debates, students not only tested their critical thinking and inquiry skills through debate but were able to exercise team-work and social skills, as they collaborated with students from other British Schools in Peru (BSP).

BSP Form II – III debate (23rd May)
This debate was again hosted by San Silvestre and again San Silvestre students from Form IV and V who had debated in the previous BSP debate were given roles as chair, timekeepers and judges. Like the first debate, the topics were impromptu and students were only given an hour to prepare. The motions were the following:

Students from seven participating BSP schools enjoyed the debate day, as well as the integration games, where they were able to win a number of English novels as prizes.